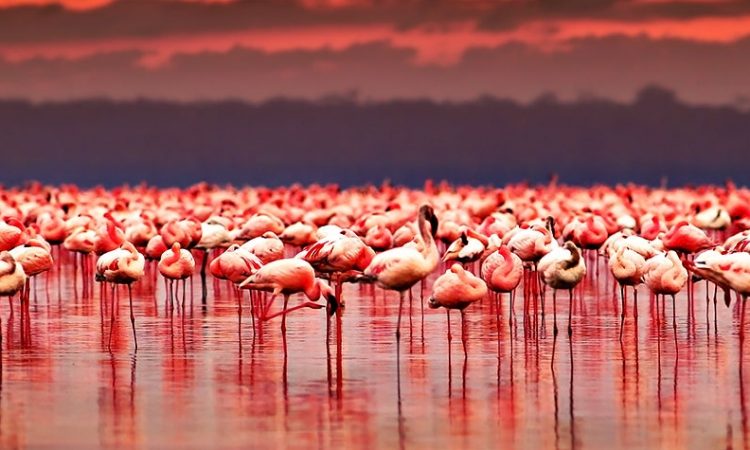 Lake Nakuru is surrounded by swamps and alkaline woodlands and bushy grasslands. The climate around the lake and in the entire Lake Nakuru park is semi-humid; it’s doesn’t get too hot neither does it get too cold.

The lake is located 140km north west of Nairobi city in central Kenya. The lake is found in the southern part of Nakuru in Lake Nakuru National Park; and the park gets its name from the lake. The park encompasses the lake and it offers protection to the lake; in fact at the establishment of Lake Nakuru National Park, it only encompassed the lake and the small surrounding areas. The park was later enlarged to include the savannah areas but it’s still a protection to the lake. Lake Nakuru is also protected under the Ramasr convention on wetlands.

The word Nakuru in the Kenya Maasai language means dust and the name comes from the soil erosion that used to happen in the area because of the vigorous agriculture activities in the area.

The Lake renown hub for birds worldwide and people flock the lake to experience the bird life on this lake. The most famous birds on this lake are flamingos that colour the lake pink because of their huge numbers.

The Lake is known to be shallow and not be deep hence the ability to host large numbers of bird species mainly the lesser and greater flamingos among other bird species that make their life on the lake.

Lake Nakuru has a great amount of blue-green algae on which the flamingos and other birds feed thus they are always on this lake. The flamingos make the view of Lake Nakuru simply beautiful, the pink colour of the flamingos coupled with the deep blue alkaline waters is magnificent scenery; you will be wowed just looking at it and taking it in.

The Lake stretches to about 40km2 and is surrounded by bushy grasslands, woodlands and marshes. The lake though it has no outlet it’s fed by three rivers and some springs that pour into the lake. The rivers that feed the lake are: – River Makalia, River Njoro and River Enderit.

The  Lake was the first part of the National park to be gazetted off as a bird sanctuary around 1960 and this was to support the conservation of the bird life on and the around the lake that boasted over 400 bird species.

The Lake is also home insects and some of them include water boatmen, midges and many more. Most of these water insects are food to the birds that stay on the lake.

The Lake also harbours some water animals that include the hippos, waterbucks and others.

Lake Nakuru is the most famous attraction of the National Park and visitors to the park are always excited to see the deep blue waters of the lake, the flocks of flamingos on the lake as well as enjoy the breeze and wind of the lake.

The National Park is one of the many game parks in Kenya and its hub for the famous lake Nakuru, over 400 bird species, over 50 mammal species and amazing viewpoints. The park is a relaxing destination with a lot of exciting safari activities and amazing sceneries that leave you totally amazed.