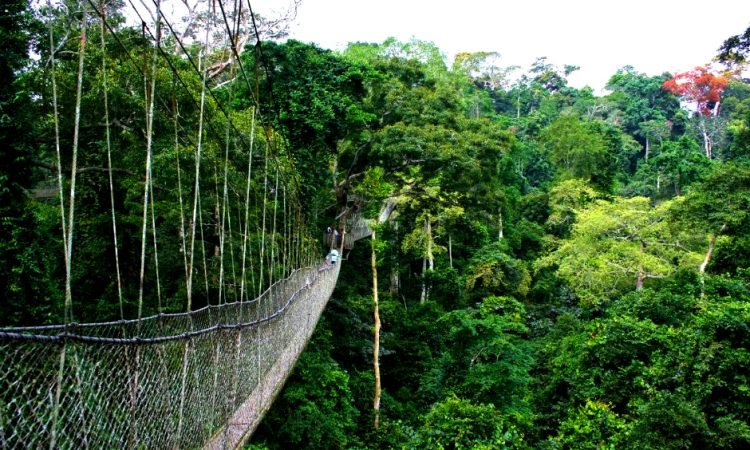 Nyungwe forest national park has a diversity of flora and fauna. The plant diversity in Nyungwe is fascinating with over 1,060 tree species with the tall tree species like the Carapa, Cyathea manniana, Engtandophrama, Newtonia and the Prinaria exelsium standing at heights of about 1,900 meters above sea level. Other species like the Balthacaria, Hagenia Syzygium, Macaranga and Podocarpus blossom at heights of about 2500 meters and above. The Sub Alpine vegetation consisting of Shrubs and Bamboo like the Podocarps, Erica johnstoni and the Phillipia grow to heights of about 2,950 meters above sea level. Other vegetation species like mosses and ferns are found throughout the forest. The mountains like Mount Bigugu, vegetation and trees found in the Nyungwe forest as well as its location within the Albertine Rift is a provide perfect home for several wildlife and different bird species. Nyungwe forest has about 85 mammal species are and 13 species of primates such as chimpanzees, colobus monkeys, the rare owl faced monkeys, the rare golden monkeys and Colobus angolensis (Angola Colobus).

Given that Nyungwe forest national park is rich in its diversity, the Rwanda government responsible for tourism has greatly supported the existence and management of the park together with conservation organizations to position the park into one of top tourist attractions in Rwanda. Below are some of the things to do while on your Rwanda safari to Nyungwe forest national park.

Chimpanzee tracking experience requires booking a tracking permit in advance at least 3 months before your travel as permits are very competitive and limited. One needs to plan their experience early, you need to stay around the park a day before your activity. In the morning you head to the park head office for a briefing about the activity. After the briefing, you will be guided by experienced guides into the forest to search for habituated groups found in the Uwinka and Cyamudongo sections of the park. You need to prepare for chimpanzee tracking because the activity is demanding following that the primates are so mobile and do not follow the main trails but rather walk in thick untouched forest. However, once they settle down, visitors get a chance to spot the primates sitting on top of the trees, feeding and grooming.

After watching the dynamic chimpanzees, you will be allowed to stay with them for about 1 hour and get to know them for a while, you will be surprised by how much they behave. One has to be physically and mentally prepared for chimpanzee tracking in Nyungwe forest in order to have the best experience, visitors should be dresses in the right trekking gears such as long sleeve shirts and pants, hiking boots, a hat, a rain jacket, a walking stick and binoculars for spotting the chimps on top of trees. Do not forget to pack bottled drinking water and light snack to renew your energies. In order to have a comfortable time tracking the chimpanzees. You are recommended to hire the services of a porter to help carry any extra heavy luggage and equipment. A chimpanzee trekking permit costs $100 and can be got directly from the Rwanda Development Board or by using the services of a good tour operator to get you one.

Nyungwe National Park in Rwanda is one of the best places to spot small primates in Africa.   Although Chimpanzee tracking is the dominant primate activity in Nyungwe forest, however, some visitors come with the purpose of seeing the other smaller primates like the Angola Colobus Monkeys, Dent’s Mona Monkeys, Grey Cheeked Mangabeys, Hamlyn’s Monkeys, L’Hoest’s Monkeys, Olive Baboon, Red tailed Monkeys, Silver Monkeys, Vervet Monkeys, White and Black and Colobus monkeys. Groups of golden monkeys are usually spotted in the park but because of their small numbers, it is usually difficult to find them. The most commonly visited popular primate species is the arboreal Ruwenzori Colobus that feed on leaves and is identifiable by the contrasting black and white (tail and whiskers) colours. All the monkey species move in troops that can go beyond 100.

Nyungwe forest national park’s small primates can be tracked using four trails including the Kamiranzovu Trail which involves walking through orchids and marshes to spot some of the primates. The Bigugu Trail which takes you up to the peak of Mount Bigugu to see more of the monkeys already sited in other trails and others only seen in higher altitudes. If you are interested in Colobus Monkeys, then the Waterfall Trail that starts from around the Gisakura Guest House up to the Tea estate is just perfect. The Unwika Campsite Trail is the last trail and is divided into two – Red (10 Km) and Grey (1 Km). This trail allows you to spot several primate species and over 400 Colobus Monkeys.

There are 2 main ways of taking walks in Nyungwe forest national park include; a canopy walks and low ground forest walks. Nyungwe National Park canopy walk is the best ever experience in East Africa, it is the only national park where nature lovers can go for a true canopy walk. The canopy walk starts at the Uwinka Visitors Center and goes through a hanging platform that is about 45 meters above the ground.  From these heights, visitors get spectacular views of the rain-forest, animals and birds. The canopy walk is very exciting and adventurous, however, scary for those with a fear of heights.

Those who fear heights actually have an option of Nyungwe forest walks. There are several hiking trails which go up to the forest interior. The trails are painted in different colours allowing visitors to spot the forest animals and birds in the interior. Some of the trails require 8 hours to complete. The Igishigishigi Trail is the shortest while the Bigugu Trail leading up to the mountain is the most difficult taking at least 5 hours to complete. The water fall trail is designed to lead visitors to the beautiful waterfalls of the forest. Nature lovers with time to spare usually take time to complete each trail at a time. By the end of their time in the forest, they would have discovered and explored everything there is to know about this old forest including the primates.

For those who love birds, Nyungwe forest is arguably the best place to go for bird watching in Rwanda. According to Birdlife International, Nyungwe National Park has over 300 bird species of which 27 can only be found in the Albertine region. Because of the biodiversity in the park and particularly its rich collection of birds, Birdlife International considers it the most important site for conservation in Rwanda. The top bird species to look out for  while walking through the established tails in the forest are the Archer’s Robin Chat, Barred long Tailed Cuckoo, Blue Turaco, Chapin’s flycatcher, Doherty’s Bush Shrikes, grey-chested kakamega, Handsome Francolin, Lagden’s Bush Shrikes, Mountain Sooty Boubou, Pockefellers’s sun bird, Purple Throated Sunbird, Red collared mountain Babbler, Rwenzori Double Collared Warbler, Rwenzori Nightjah, Rwenzori Turaco, Rwenzori Batis, White Bellied Robin chat, White Tailed Flycatcher and the Yellow Eyed Black Flycatcher.

Because some of the bird species inhabit specific sections of the park, one needs to take a guided bird walk. Bird walks need to be booked with the Rwanda Development Board at a cost of $50. The Birds Guides have knowledge about the characteristics of most of the bird species and where to find them. Their best method of identifying them is by bird calls. We recommend that you use more than one of the established trails to ensure that you have spotted most of the bird species. The dry season is perfect for birding because migrant birds usually flock the forest to find food and escape harsh winter conditions in Europe.

Biking through the Congo Nile Trail

The Congo Nile Trail passes through Nyungwe forest national Park allowing visitors to bike through this particular section. Biking through the Congo Nile trial offers perfect opportunities to explore the park as a whole. As one meanders through the trail by bike, they are bound to encounter countless bird species, primates and other forest wildlife. It is also a perfect way to see all the beautiful tree and plant species that makes the forest so attractive to nature lovers. Camping is a must while biking through the trail. It is therefore important to carry along the right clothing, camping equipment, snacks and water.

It is good to note that activities in Nyungwe forest take place throughout the year. However, the best time to visit Nyungwe forest national park like in most countries of East Africa is during the drier months of June through August and December to January. During these months, the rains are less intense and forests less thick and muddy. Travelers to Nyungwe National Park can expect a memorable experience given the amazing set of activities open to visitors in the park. The park is blessed with amazing views of mountains, water bodies and green vegetation that allow great forest walks and wildlife activities.