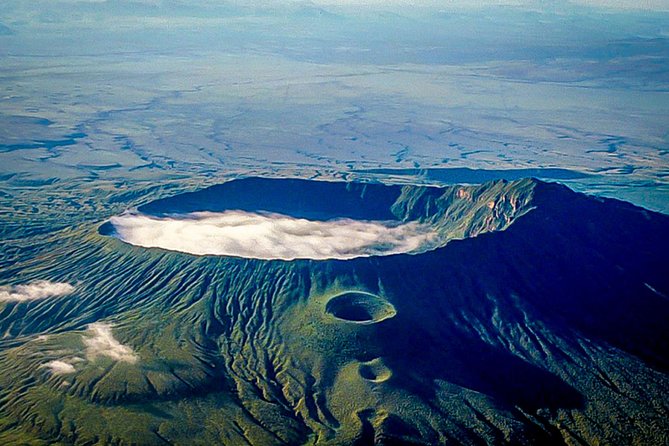 Mount Longonot is a stratovolcano that last erupted in the 1860s and now sits dormant southeast of the famous Lake Naivasha and within the Great Rift Valley in Nakuru County. This Volcano with its unique features is top attraction in Nakuru and Kenya at large, receiving thousands of tourists that visit the mountain to see its unique features and take adventurous hikes on the mountain.

Mount Longonot has a caldera that was formed over 20000 years ago by trachytic lava eruptions. The crater is surrounded by vents spread across its walls and the crater floor is covered by a forest of small trees. Mt Longonot peak stands at 2780m and is on a rim of a small caldera that is submerged by a lava cone.

Mt Longonot has gushing lava eruptions flows that occurred on the mountain flanks and on the caldera floor. The volcano also has several parasitic cones together with a cone that was developed within the caldera and it’s crapped by a 1.8km crater.  Geodetic activity records on the mountain show substantial evidence that there is active magma under the Volcano.

There have been several rumours of the mountain’s eruption from observations of the locals around the mountain since 2012 but investigations have shown that all the alarms have been false alarms so far.

Mt has however had its share of tragic, in 2009 the mountain suffered bush fires that burned up quite a huge size of the mountain and went into the crater, also suffocating and killing the wildlife that was around.

Mount Longonot slopes are home to a couple of wild animal species that include but not limited to Thomoson’s gazelle, zebras, giraffes, hartebeests, buffaloes and many more.

Mount Longonot being such a unique mountain is a top attraction in Nakuru, and lots of people visit the mountain throughout the year to experience this mountain. Visitors to the Longonot Mountain are excited to take on the 2 to 3 hour hike up the mountain’s crater rim.

The mountain’s crater rim is simply beautiful, people enjoy taking treks up the crater where they get to enjoy beautiful views of the crater, the mountain surrounding that include but not limited to the Lake Naivasha, Crescent Island and some parts of Nakuru County.

Up at the crater you also have beautiful viewpoints for bird watching – watching birds on Lake Naivasha and birds roaming around Mt Longonot National Park. You will also see numerous wild animals from the top moving through the park and the small forest at the crater floor.

Mount Longonot in Mt Longonot National Park is located in Longonot town about 60 km northwest of Nairobi Kenya’s capital. The mountain is accessed by a tarmac road off the Nairobi Nakuru highway.